I just sat down at Starbucks with big plans to write about a serious topic that is very close to my heart, but that post has to wait. I need to switch gears from my serious side to my silly side this time. It’s only fitting after this week’s festivities!

Ok, so as everyone knows, the Cubs won the World Series on Wednesday, November 2nd, 2016. Holy moly, THE CUBS WON THE FREAKING WORLD SERIES. Incredible. My Dad raised me a Cubs fan, and next to my Dad, my husband Kent is the biggest Cubs fan I know. So to say that Kent and I whooped it up on Wednesday would be an understatement. Here’s a recap of the last few days:

Tuesday night was game 6, and we watched it at home. Kent was planted on the couch in the family room and I had the game on in the basement while playing Barbies with Jade. The Cubs had a big lead early on and all of a sudden, Kent comes storming downstairs like a bat out of hell saying, “We’re going to Wrigley tomorrow, we have to.” So I said, “Ok, but what about the kids?” He said he’d call his mom, and being the amazing grandma that she is, she agreed to take the kids for the night. Immediately, I knew the next 48 hours were going to be both epic and agonizing.

For the EPIC part….

Wednesday morning, Kent went to work and texted me that I needed to hop on either the 11AM or 1PM Metra train to the city. What?! I was thinking more like late afternoon, but apparently I did not quite understand what was about to ensue, so I took the 1PM train. I met Kent in the loop and we hopped on the L train to Wrigleyville. We walked around the ballpark and took the standard photo of us in front of the Wrigley Field sign and then started scoping out the bar scene. There were already people waiting in huge lines to get into classic spots like Cubby Bear. It was 2:30 PM and the game didn’t go off until 7PM, oh boy.

We scoped out several bars to see what the different covers were – $100, $60, $80, $40. We chose $40. Old Crow on Clark Street – a huge bar with tons of TVs, perfect. All of the tables were reserved but we found a little spot at the bar, which is where we’d stand for the next 9 hours. Yes, 9 HOURS. Here are the highlights of our experience during those 9 hours and beyond…

– 3PM, our first of what felt like 100 rounds of Bud Lights were ordered.

– The National Anthem was sung and everyone in the bar sang along, things were getting real. This was it.

– And then we all oozed out into the streets. Kent got me on his shoulders and what a scene! Chicago has never been happier! The cheering didn’t stop, the singing of “Go Cubs Go” will forever ring in my ears and just the overall sight of pure bliss was something we’ll remember forever. 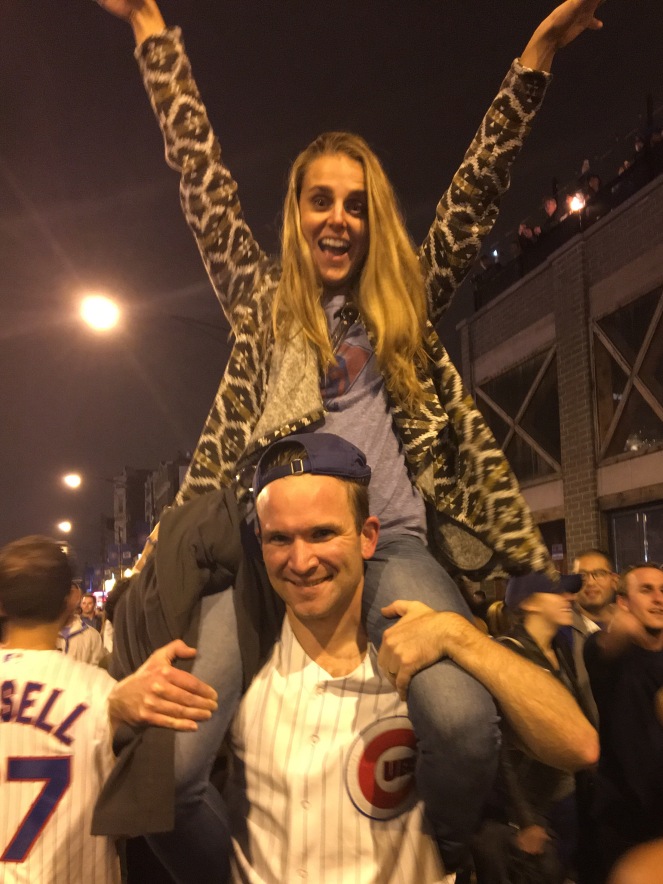 – We had some friends celebrating nearby, so we went to meet them. (This is where the “and beyond…” part comes into play.)

– I bought drinks for random Cubs fans I didn’t know .

– Basically, my party hat was strapped on about as tight as it could get!

So my husband will be the first to tell you that I hate it when the party comes to an end, but 12 hours of partying was well over the limit and it was time to go home.

And now for the AGONIZING part…

The alarm went off at 7AM. One of us had to go get the kids. I chose Kent! (I owe him, I’m aware!). All I could think of was how in the hell I was going to survive the day. Mama was very “ty-ty” (code for tired) and feeling “under the weather”.

After Kent picked up the kiddos, I took my daughter to preschool at 9AM. My first words to my mom friends at drop off were “I will not be winning any parenting awards today!” Boy was that true! This is what happened at our house yesterday:

– The laundry stayed in the dryer, where it had been since Monday (I blame Halloween AND the Cubs for that).

– My Aunt, Uncle, Grandma and Sister brought over lunch, and I could not get down a bite.

– Jade asked to play outside on multiple occasions but I just couldn’t, so I said “no”. She may have cried. (Awe!!! I know!)

– This led to Jade watching her iPad and movies all day.

– Griff tore up the house in any which way he could and I never stopped him.

– Dinner was a frozen pizza, no veggies or fruit on the side.

– Dinner dishes did not get done until this morning.

Believe it or not, I did have some fun on this most un-glorious day. I was introduced to Snapchat. When my sister Lisa came over for lunch, she was making her and Jade into funny animals through this app, so I said, “Let me see that!” and started experimenting with all of the different camera options. I could not contain myself, I was laughing so hard. I found the ugliest camera options and was dying at the hilarity of them. I then realized they were perfect descriptions as to the way I felt. I sent this one to Kent while he was at work, just in case he was wondering how I was feeling:

The tear you see is from my uncontrollable laughter…I had a serious case of the Hangover Giggles. This proved to me that there are actually positives to being hungover, who doesn’t love a good laugh?!

I was really hoping that our 9PM bedtime last night would be the cure I needed to get back to normal, but alas, Griff woke up at the ripe time of 5:30 AM and I was still feeling far from normal. Lisa texted me a few hours later to see how I was doing, and I responded with, “Something like this…”

Oh my gosh. I honestly cannot stop laughing as I write all of this. And I’m actually really proud of myself for that. Because if this had all gone down a few years ago, there is no chance in the world I would ever admit to any of these shenanigans. You couldn’t have paid me enough money to blast this out into the universe for anyone to see. Because what would they think?

– She let her daughter play on the iPad all day?! Ugh!

– She couldn’t even go outside to entertain her kids? Pathetic!

– She posted those horribly ugly photos of herself? Yikes!

– She couldn’t even do the dishes or finish the laundry? Sad Mama!

I literally would have gone into a state of depression as to what a horrible mom I was. And then I would have set a bunch of unrealistic parameters for myself:

– No more iPad for Jade.

– Dishes will get done after every meal.

– The laundry will get done AND put away on the same day.

The list goes on. But seriously, cut a girl a break already! Yesterday was a rough day but am I really a terrible person or mom because of it? Did I ruin my kids’ childhood by letting them play with whatever and not taking them outside for one day? I think not. Yes I’m a mom, but I’m also a girl who has an inner party monster that likes to come out every now and again. As much as I tell myself that maybe those days should be over, it’s time to admit that my inner party monster is and always will be a part of ME.

So that’s that. So whether you’re:

A – A mom who also likes to whoop it up sometimes.

B – A mom who wishes she could whoop it up sometimes, but doesn’t.

C – A mom who frowns upon other moms who like to whoop it up.

I hope reading this made you giggle, feel better, put you at ease, or if you’re typically someone against the Inner Party Monster, that it made you reconsider it’s existence. The night the Cubs won the World Series is a night I will never forget. So thank you Inner Party Monster, I love you!

As I sign off for now, I’m thankful to say that I am starting to feel like a normal human being again. The Starbucks is helping – cheers!!! – Charlotte

6 thoughts on “My Inner Party Monster”