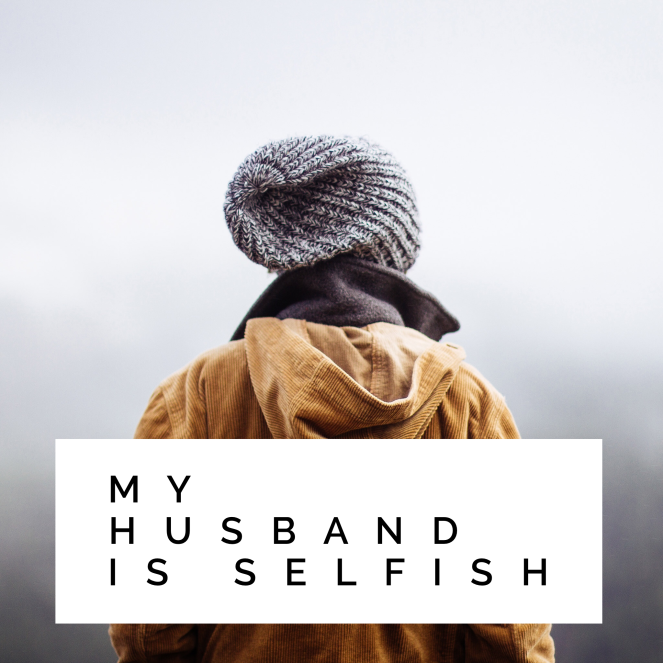 So yes, a few years ago, I flipped a lid and told my husband he was selfish.  I may have even given him dagger eyes and told him he was VERY selfish. But all I kept hearing were questions like:

I really did want him to get out and enjoy himself, I truly did, but deep down inside, there was also a burning sense of resentment and wonder as to why he always got to do these fabulous things for himself and I didn’t.

But then I figured it out, there were two things standing in my way:

Let’s talk about these two things for a minute:

My inability to speak up. When he’d approach me with these questions, there were times when it wasn’t ideal, when I could use help around the house or maybe at a time when I was hoping to do something for myself. But I was so concerned I might ruin his day by saying so that instead I said nothing and went along with his plans.

This leads me to my guilt. Oh my goodness, the guilt. What a terrible thing. I think it’s safe to say that women carry WAY MORE guilt than men. And if you’re a mom, multiply that times a million. So what did I feel guilty about? That if I suggested something else, I’d be making him do something he didn’t want to do. That if I went to do something on my own, I’d be gone from the kids for too long. That there was something else I “should” be doing with my time.

Guilt also comes from feeling the need to do everything myself. Asking for help and certainly accepting help were complete foreign concepts to me. If I didn’t feed the kids breakfast, lunch and dinner, brush their teeth, bathe them, clothe them, play with them, clean the house, do the laundry, wash the dishes, organize play dates, birthday parties and vacations ALL BY MYSELF….then I would be a failure.

If I spoke up…my husband and I could actually have a two-sided conversation about what our day would look like. Maybe we could each get a workout in, maybe I could go out with the girls this week and he with the guys next week. Then we could slip in a date night on the weekend. Maybe I’d learn that suggesting alternate plans was really not going to ruin his day, or that if I had something I wanted to do on my own, that he’d be happy to have some alone time with the kids. And as much as I want my husband to tell me on his own that it’s ok to get out for awhile, maybe he just needs to be told. And maybe when he’s told, he’ll totally get it. Maybe having a voice won’t be that bad after all, maybe, just maybe, it will be great. Empowering. Exciting.

If I let my guilt go…maybe I’ll feel a huge weight lifted off my shoulders. Maybe I’ll realize there was no reason to feel guilty in the first place. Maybe my kids will grow up knowing their mom is always there for them AND that she’s great at doing things she loves outside of being a mom. Maybe this will give my kids the confidence to make themselves a priority too. Maybe I’ll realize that just because my to do list doesn’t get checked off every time I have a spare minute, that it will still indeed get done. And maybe I’ll realize that accepting help is ok, that I don’t have to do every single thing all by myself. Maybe, just maybe living guilt free will be fun. Exhilarating. Freeing.

So the decision was made, I was going to find my voice and lose the guilt.

I’m not saying it has been easy or that I’m even close to perfect at it, but it sure feels good to have found a balance. I can honestly say the entire household seems to be happier about my new found way of life. My husband doesn’t feel the underlying resentment in my voice when he asks for time on his own, the kids no longer have an irritable mom and I have a sense of calm within me that I’ve never had before.

So you see, my husband is not selfish. He’s actually my hero and a daily reminder that I want to be just like him.

If this resonates with you, I challenge you to get out there and let having a voice and losing the guilt become a part of you too. YOU can do it!

PS #1 – While the above lesson is very important, remember that it is all about balance. While we tend to under-do the “me time” thing, we can certainly overdo it too. Find your balance.

5 thoughts on “My Husband is Selfish”